The system require merely 10 seconds to extinguish a fire

Both FM-200® gas and FK-5-1-12 gas are inert in contact with electronic devices (they do not cause shorts), and after application they evaporate.

The number and volume of extinguishing agent reservoirs is adapted to the size of the space to be protected.

Based on a 25-bar pressure, the system eliminates the need to dedicate a separate space for reservoirs with extinguishing agent.

The SAFEMATIC™ MP is preliminarily designed from an engineering point of view.

A pre-engineered system, in which mechanical and plumbing works are done at the manufacturing stage.

The system can be initiated manually or can operate in a fully automated fashion.

The SAFEMATIC™ MP is a single-zone device with modular construction. Individual modules can be joined to create a battery of reservoirs connected by a pneumatic control line, in which each reservoir containing extinguishing agent is subordinated to a separate pipeline capped with an individual nozzle. The control system of the extinguishing process consists of an automated extinguishing control centre, fire detectors, manual fire warning systems, and fire suppression control buttons.

At the moment that fire appears, the detectors send a signal to the control centre, initiating the extinguishing process. The reservoirs release gas which is distributed via dosing nozzles to the interior of the space. Simultaneously, visual and sound warning signals are set off, informing those present that an extinguishing operation is under way. It is also possible to manually control the extinguishing process and to abort it.

The configuration of the SAFEMATIC™ MP Fixed Fire Extinguishing System involves the selection of cannisters in the extinguishing complex in order to ensure that the amount of extinguishing agent is appropriate for the cubic volume and nature of the space to be protected. 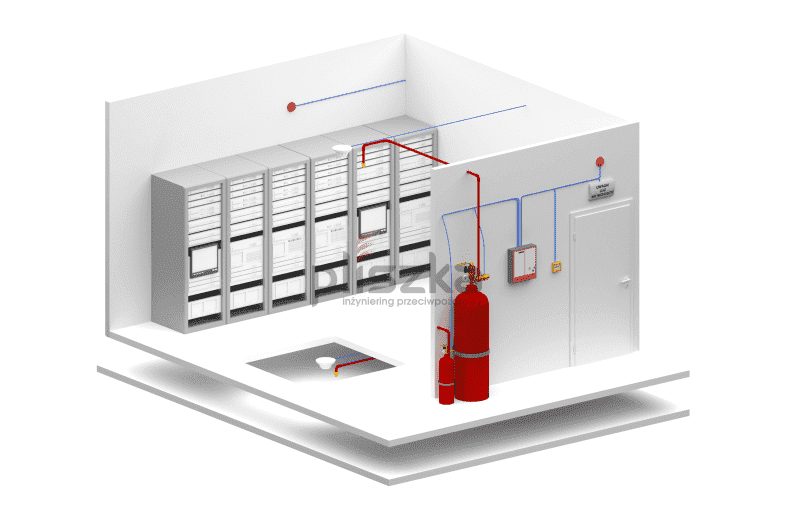 The SAFEMATIC™ MP Fixed Fire Extinguishing System based on FM-200® or FK-5-1-12 is intended for extinguishing of group A, B, and C fires and for the fire protection of electrical devices in closed spaces. It works best in spaces with a volume of roughly 100 m3 to 400 m3. The SAFEMATIC™ MP system is especially recommended as fire protection for electrical stations and substations, production halls, high risk areas, refineries, warehouses, server rooms, data processing centres, laboratories, treasuries, archives, libraries, and everywhere that there are devices and materials which are sensitive to the action of powder-, foam-, and water-based extinguishing agents.

▸
◂
This website uses cookies to provide services at the highest level. By continuing to browse the site, you are agreeing to our use of cookies.I agreePrivacy policy